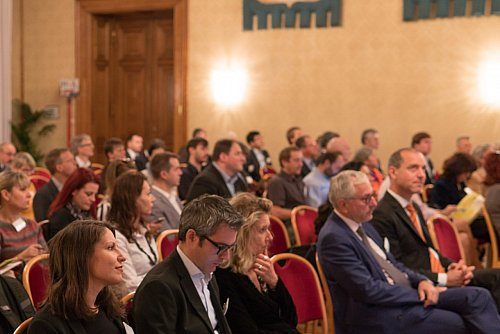 The DSPF Networking Event took place in Vienna City Hall on 31st of October 2018. The event was dedicated to the 12 projects of the Danube Strategic Project Fund which is financed by the European Union and the City of Vienna.

The 12 projects were at the center of attention throughout the day. The highlight of the two project presentation sessions were the 12 graphic recording videos which visualized the most essential project content.

At the beginning of the event, representatives of various institutions emphasized the importance of the projects for the whole Danube region:

The event was closed by an inspiring talk of Iva Taralezhkova (Board Chair of Citizen Participation Forum), focused on civic participation and its importance for the further development of the Danube region. She put forward an impressive example of the successful cooperation of Bulgarian municipalities to strengthen the region.

At the event there was plenty of time for networking activities and room for sharing and inspiration at the project space.

More information on the 12 projects can be found on the DSPF blog: https://dspf-projects.tumblr.com/