Close
PrevPre-paid travel and accommodation participation at the Annual Forum of the EU Strategy for the Danube Region, 27-28 June 201902 April 2019Next 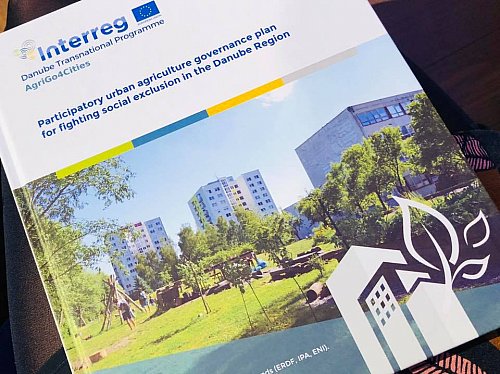 Budapest, 19th of March 2019 – The final conference of the AgriGo4Cities project joined scholars, practitioners, NGOs, activists, policymakers, public institutions’ representatives and others in Budapest, with the means of promoting participatory urban and peri-urban agriculture (UPA) in order to tackle socio-economic exclusion of vulnerable groups and stimulate sustainable urban environment.
Since the beginning of the project, the partnership collected and synthesized relevant knowledge about UPA, developed a concept of participatory UPA and implemented pilot actions in six locations in the Danube Region to test the jointly developed methods.
The conference started with welcome speeches from Ákos Szépvölgyi (managing director of the Central Transdanubian Regional Innovation Agency), Mimi Urbanc (deputy director of Research Centre of the Slovenian Academy of Sciences and Arts) Rudolf Schicker (Danube Strategy Point) and Claudia Singer (EUSDR PA10), who have highlighted the importance of the transnational conference.

We continued with the key lectures. Firstly, Benoit Esmanne (DG for Agriculture and Rural Development) presented the future cohesion policy, specific objectives and key challenges that they are facing. In relation to cross-sectoral approach, he believes, that »There is a challenge to well integrate the cross-sectoral dimension of UPA, that needs to be overcome for it not to be present only on the paper level.«

György Alföldi (Budapest University of Technology and Economics) showed some of the good practices of urban planning and the process of their implementation. In relation to lack of green urban areas, he said: »With students, we studied – to think about agriculture instead of buildings, when talking about urban areas. Shrinking cities book is a result of that process.«

In the second part of the conference, Jani Kozina (Research Centre of the Slovenian Academy of Sciences and Arts) gave some contextual background of the project and the idea behind it, while Kaja Cunk (expert associate from the Association for Culture and Education PiNA) presented the methodology of the participatory UPA.
Nela Halilović (Municipality of Velenje), presented how the partners developed the action plan and applicated the participatory approach in pilot areas. She emphasized that »All of the partners put a lot of effort in action plans – our lessons were different, but we’ve learned a lot from each other and we’ve ensured the sustainability of the project by planning ahead.«
Máté Szalók (project manager from the Central Transdanubian Regional Innovation Agency), who has coordinated the development of the transnational governance plan, has summarized the lessons of the AgriGo4Cities project. He stressed that »we must spread the knowledge and information among our target groups about urban agriculture and involve them in our process. A lot of action can be done in these kinds of environments.«

Some of the best parctices of the Danube were also presented. The lectures were done by Dona Pickard (Bulgarian Academy of sciences), Rudolf Schicker (Danube Strategy Point) and Ella von der Haide (University of Kassel).

Dona Pickard presented the challenges and successfull strategies to promote social inclusion and community development through UPA activities. She stressed that »It’s important to see that community is not one thing – there can be conflicting opinions, even within one community.« and also added, that »we need to make people aware, that they are not alone. Their problems are shared in the larger community and they have a way to solve them.«

Rudolf Schicker presented the traditional and new ways for gardening in the City of Vienna. He stressed, that the cooperation between the city and its society was important throughout the history. He gave many examples, from building settlements cooperatively, first forms of urban gardening, renting gardening plots for self-harvest, community gardens, gorilla gardening and many others.

Ella von der Haide presented the examples of top-down and bottom-up approach of UPA. She presented some key points that happened with activation and empowerment of socially excluded groups and the challenges that they’ve faced with, but added that she thinks that: »there are more positive expects and the challenges can be dealt with.«

Tracey Wheatley presented community steps towards a local food culture and what they’ve done to successfully get communities together.

Imre Hégli presented some of their good practices of the urban districts. He believes that the education of the youth is very important and that’s why they’ve done several things in that direction.

Monika Kertész presented their project and it’s four important principles – urban regeneration, policy and debate, architectural culture and community and sustainability and innovation. She emphasized that what they wanted to do was »getting involved in making city parts more ‘liveable.’ We started to think about how to adapt and improve, develop and make our approaches fit into the education.« She also added that »our responsibility is to cooperate and become a community with more conscious city users and involve them into the planning.«

The last part of the conference joined Benoit Esmanne (DG for Agriculture and Rural Development, Jani Kozina (Research Centre of the Slovenian Academy of Sciences and Arts), Stefan Dudau (City hall Vaslui), Monika Kertész (Head of Contemporary Architecture Center’s Community Gardening Project) and Claudia Singer (EUSDR PA 10) in a discussion about participatory urban agriculture, which is addressing urban and social challenges in a unique, but also complex way. They’ve talked about the impact of European policies on enabling or inhibiting the development of participatory urban agriculture.

Benoit Esmanne presented the efforts of the DG AGRI in the field of urban agriculture post- 2020. He said that the urban agriculture is really an opportunity to fight against the generation renewal and that that is one of the things that they want to encourage »by showing that there are opportunities. It is also important to disseminate and raise the awareness about the topic.«

They’ve continued with the discussion about the readiness of the Danube region for the systemic inclusion of urban agriculture as a livelihood strategy that can enhance the resilience and sustainability of urban areas and populations. Claudia Singer stressed, that some areas are ready and some are not, but what we see is that there is a clear need for improvement. She added that »that in a way shows that urban agriculture as a tool for participatory planning can be a good solution to address the complex issues and increase the quality of life.«

Jani Kozina continued with the key lessons of the AgriGo4Cities projects. He said, that »through different activities, actions and learning interactions, we’ve studied the practices in different contexts. We’ve developed our methodology, targeted different groups and saw that there is a lot of evidence and reports, showcasing that things are happening in »the ground«. In order to get the scaling and systematic change, we need to combine the bottom-up and top-up approaches.« He also added that »systematic solutions are needed if we want to make results durable.«

The panel continued with the discussion of the municipalities’ involvement in participatory actions.Stefan Dudau expressed that there is a need to find common ground, that » the municipality must interfere and show that a particular space is of higher value than for example having 3 or 4 parking spaces. It’s a negotiation and it’s not easy.«

In the last part of the panel, they spoke about what it takes for the initiative of urban gardening to become a movement. Monika Kertész said that »we need to teach people to believe that they can be involved, that there is a kind of passivity. People need some guideline of how to plan, get involved, make decisions. It’s a responsible task for us to teach them, as kind of a knowledge transfer.«

Kaja Cunk, the moderator of the panel ended the discussion with a thought: »By introducing a new type of social service, by redefining ownership, by developing new funding models, by facilitating the circular economy, we can facilitate change that would pervade different elements and change our political, economic and social system. This debate should not end with urban gardens, and it should not end in this place.«