Trafficking in human beings (THB) is a complex phenomenon that is highly dependent on regional and local economic, social as well as cultural factors.

It is rooted in vulnerability to poverty, lack of democratic cultures, gender inequality and violence against women, conflict and post-conflict situations, lack of social integration, lack of opportunities and employment, lack of access to education, child labour and discrimination.

Local actors – be they public authorities or NGOs – often are closest to both victims and suspects of THB. The local level offers a variety of possibilities for effectively counteracting human trafficking. At the same time, the local actors often lack capacities, resources or know-how in order to initiate activities.The European Union’s report about the “Strategy towards the Eradication of Trafficking in Human Beings 2012–2016” strongly recommends that Member States consult regional/local civil society actors when implementing measures and reporting on achievements. Against this background the EU Strategy for the Danube Region with its specific Priority Area 10 dedicated to  “institutional capacity and cooperation” is working towards a thematic networking initiative which shall address in particular cities, towns, relevant NGOs and local institutions in order to enhance capacity-building and know-how transfer on this genuinely transnational and transversal issue.

With the project Danube Cities against Human Trafficking (D-CAHT), we want to:

So far, Priority Area 10 “Institutional Capacity and Cooperation” realised a series of round tables and working groups in order to support mutual learning and exchange of know-how among local stakeholders and experts as well as developed “Guidelines for Municipalities” based on the findings of the STROM project funded by the Council of Baltic Sea States (CBSS). 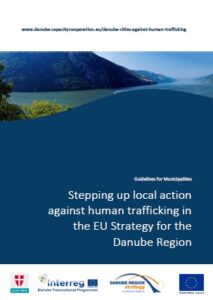 Priority Area 10 “Institutional Capacity and Cooperation” drafted Guidelines for Municipalities in the Danube Region to step up loacl action against trafficking in human beings. The guidelines are based on the findings of the STROM project and provide basic information and valuable tools for cities and municipalities in the fight against human trafficking. The guidelines are considered work-in-progress and shall be complemented with further good-practices from the Danube Region.

Guidelines for Muncipalities: Stepping up local action against human trafficking in the EU Strategy for the Danube Region (Version 1.2,March 2018 (PDF,871kb)

D-CAHT Round Table on strengthening the role of municipalities and cities in preventing & combating human trafficking & exploitation: the importance of a coordinated and integrated approach | 18 April 2018 | Ljubljana

Round table gathered around 30 experts, practitioners, academics, representatives of municipalities, civil society organizations, international organizations and others interested in the topic of combating human trafficking from nine countries from Danube Region and wider gathered in Slovenia. They dedicated lively discussion and exchange of views on opportunities for strengthening the role of municipalities and cities in preventing and combating human trafficking and exploitation. They have touched upon various angles of this highly multifaced problem that has rarely only national effect – most often regional approach is bringing the most results.

The Round Table gathered experts from public administration, NGOs, international organisations and academia in order to discuss major challenges in the identification of victims and cooperation between different entities in the fight against trafficking in human beings. A special emphasis was given on the relation between THB and the migration crisis in Europe as well as on protecting children rights. Good practice examples from Vienna, Ljubljana, Barcelona and Moscow showed different approaches to local cooperation between city administrations, law enforcement and NGOs and provided insights on local methods of fighting and preventing trafficking in human beings.

Further information on past round tables and working groups will be published soon.