The state of civil society in CEE19 September 2019Next

Round Table on Trafficking in Human Beings 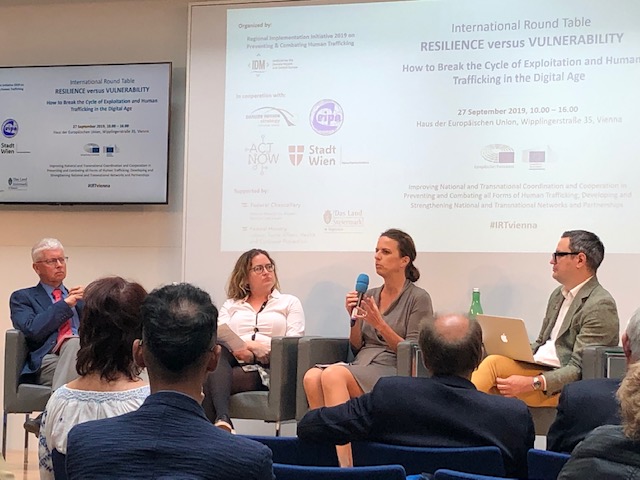 On 27 September 2019, experts and practitioners in the fight against trafficking in human beings gathered in Vienna to discuss how information and communication technologies (ICT) both support and challenge the resilience of potential victims. The round table was organised by the Regional Implementation Initiative (RII) at the IDM and took place at the Haus der Europäischen Union in Vienna in cooperation with the City of Vienna, Act Now, Ceipa and EUSDR Priority Area 10.

Resilience is generally thought of as a ‘positive adaptation’ of individuals in the face of a stressful or adverse situation. It is understood as overcoming deeply stressful situations with ‘competent functioning’. So far, resilience is often mistaken as a trait of the individual. However, most recent research now shows that resilience is the result of individuals being able to interact with their environments and the processes that either promote well-being or protect them against the overwhelming influence of risk factors and adverse conditions, such as maltreatment, poverty, exploitation, trafficking and/or other factors triggering vulnerabilities. Additionally, the use of ICT provides new challenges that increase vulnerability as well as new opportunities to strengthen resilience of victims.

In her opening statement, Ines Stilling, Federal Minister for Women, Youth and Family of Austria, stresses the role of ICT as a “tool to accelerate trafficking in human beings and to seek help for victims.” She also concludes that regular networking and exchange at all levels is needed to foster cooperation as a pre-condition to successfully tackle trafficking in human beings.

This perspective was also supported by Petra Seebauer, OSCE National Rapporteur for Austria, and Wolfgang Bogensberger, Head of Representation of the European Commission in Austria. Particularly at European level, the EU defines three priority areas for cooperation to fight trafficking in human beings: 1) Increasing training in law enforcement; 2) Granting clear access to rights for victims; 3) Coordinating and consolidating cooperation within and outside the EU.

In the following panel discussions, experts and practitioners elaborated on the questions: How can resilience in the context of human trafficking be strengthened? What are the protective/adverse factors and how are different forms of individual resilience overlooked by authorities, policymakers and rescuers? How has the digital age with its social (and other online networks) media hype, including its ‘liking-compulsion’ and ‚clicktivisme’ influenced the modus operandi of (anti-)human trafficking & exploitation with regard to vulnerability and resilience? What ethical, social and policy frameworks (should/must) ensure that Apps (created to offer advice to would-be migrants on job opportunities abroad and/or on how to avoid being exploited or trafficked)) are not used subsequently against the interests of the users? Do we need a radical shift in perspective? Do we need a new anti-trafficking/anti-exploitation strategy and/or (international, European, national) instruments?

Against this background, the round of international experts stressed to challenge our view on vulnerability and resilience in order to develop and implement measures that truly support victims and enhance prevention. In this regard, strict migration policies were largely seen as counter-productive as experience shows that they are accelerating trafficking in human beings and might criminalise victims. Thus, it is not only important to prosecute traffickers, but also implement policies that reduce the vulnerability of people. This mainly refers to migration and asylum policies. Michael Dottridge states that we should “reverse migration policies that leave migrants in limbo.”

At the same time, people working in victim protection or prosecution need to challenge their views on victims, as not all victims follow a strict pattern. Once, we have a better understanding of the victims of trafficking in human beings, we have the fundament to design policies and measures to properly support them at all levels, including the use of ICT. Part of this is, to see a person not as vulnerable individual, but as an individual in a vulnerable situation. This also applies for the principle of resilience.