How to tackle obstacles for cross-border public services

Cross-border public services can provide multiple benefits to people living in border regions. However, implementing public services across borders comes with a lot of obstacles.

Apart from administrative or legal differences between countries, the Danube Region also has to deal with different ‘categories’ of borders. Only around half of the partner countries are part of the Schengen area; Romania, Bulgaria and Croatia have not yet joined the area and there are different agreements in place with non-member states.

Yet, since more than 40% of the Danube Region’s territory  is border area, it is worth taking a closer look at how to set up successful cross-border public services. Not least because the Danube Region has a number of functional areas that could boost development in the Danube Region.

This is why Priority Area 10 hosted the webinar on “Cross-border public services” on 27 September 2022. The aim of the webinar was to show how stakeholders can make the most of the benefits of cross-border services.

How to do cross-border public services 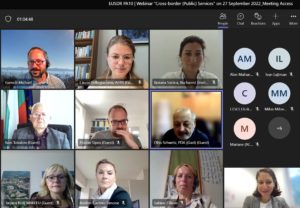 The research team found explanations in the various degrees of permeability of borders or the lack of experience in cross-border service provision. Likewise, there is no evidence that language barriers have a strong hampering effect. Furthermore, the analysis presents various factors to consider when setting up cross-border public services. This can help institutions to develop strategies or plans for public service provision across borders.

The UNESCO GeoPark Karawanken is a good example how border areas institutionalised their long-staning cooperation. Gerald Hartmann, GeoPark Karawanken, presented how the cooperation between 9 municipalities in Austria and 5 Imunicipalities in Slovenia developed. It all started in 1985 and evolved step by step to become a European Grouping of Terriorial Cooperation (EGTC). In doing so, the municipalities developed cooperation ties in the areas of environment, tourism, education and more. Over time, the border area looked for various forms to strengthen their cooperation. Today’s EGTC GeoPark Karawanken faciliates access to EU funding and allows for a stable permanent cooperation. The office staff consistes equally of Austrian and Slovenian members that managed to develop and implement further initiatives in the area. This way, the EGTS became a driver for development in the region.

Yet a different example is the cross-border ambulance initiative. Gyula Ocskay, CESCI, presented how Hungary and Austria working on a cross-border ambulance scheme based on the example of Austria and Czechia. In 2016, Austria and Czechia developed a cooperation framework for emergency health care across borders. In doing so, both countries worked together on the basis of a bilateral state treaty on mutual aid. Despite various technical, administrative and cultural differences in emergency care, the partners took a pragmatic approach. Thereby, Austria and Czechia agreed on basic requirements to provide effective emergency health care on both sides of the border.

Now, the plan is to transfer this approach to the Austrian-Hungarian border as well as to Slovakia. The basis for the cooperation are bilateral agreements. Then, the different emergency care providers develop the details of the service provision. In doing so, the partners have to find a common ground despite major differences in emergency care provision.

If border regions face obstacles in cross-border service provision, the b-solution programme could be the right place to turn to. Cinzia Dellagiacoma, AEBR, presented the initiative that provides expert support to resolve legal and administraive obstacle of cross-border public services. Since every legal and administrative problem is unique, the selected institutions get tailor-made ideas on how to resolve their specific problems. This can be helpful for concrete issues that some areas facing and do not know how to approach them. Likewise, b-solution can help transferring pilot actions or procedures that need further adaptation to work.

So far, b-solutions provided support in around 90 cases. Interested public entities can apply until 21 October 2022 to the b-solutions call. The application procedure is simple and requires the description of a concrete problem. There will be another call that will be open until 28 February 2023.